Numab’s fragment-based multispecific antibody therapeutics are designed to address the many escape mechanisms of disease by simultaneously engaging multiple targets.

Numab’s plug-and-play platform allows for a highly rational and reproducible process to rapidly yield promising clinical candidates with new mechanisms of action, superior efficacy and a favorable safety profile. We are steadily expanding our collection of building blocks to identify promising combinations of specificities for use in immuno-oncology as well as in other therapeutic areas.

At the heart of our plug-and-play platform are a modular scaffolding technology with unprecedented stability, and the ability to generate highly stable multispecific antibody formats. Together these two cornerstones fuel our ability to generate a broad variety of first in class Multispecific Antibody-based Therapeutics by Cognate Heterodimerization, or MATCH for short.

Numab stabilizes its variable antibody domains by exchanging a notoriously unstable part of the scaffold (FW4 of Vϰ) by a stability conferring sequence referred to as lambda cap (FW4 of Vλ; shown in red).

A scaffold with unmatched stability

Traditionally, antibody Fv fragments have proven intractable to therapeutic use due to their inherent instability. With an elegant engineering step, Numab has overcome this hurdle by replacing a short stretch of a human variable light kappa-chain with the equivalent lambda-chain stretch at the C-terminus of the light chain. This results in a fully human Fv acceptor scaffold with unmatched stability on which CDRs (complementarity determining regions) from any screening campaign can be engrafted, irrespective of their origin, be it human, rodent, or rabbit. The so-called lambda-cap constitutes a true breakthrough and endows our human acceptor scaffold with hitherto elusive stability. The resulting favorable properties have effectively turned the humanization/stabilization procedure into a routine procedure for most antibodies while maintaining their affinity and on the whole, adopting the human acceptor scaffold’s biophysical properties. 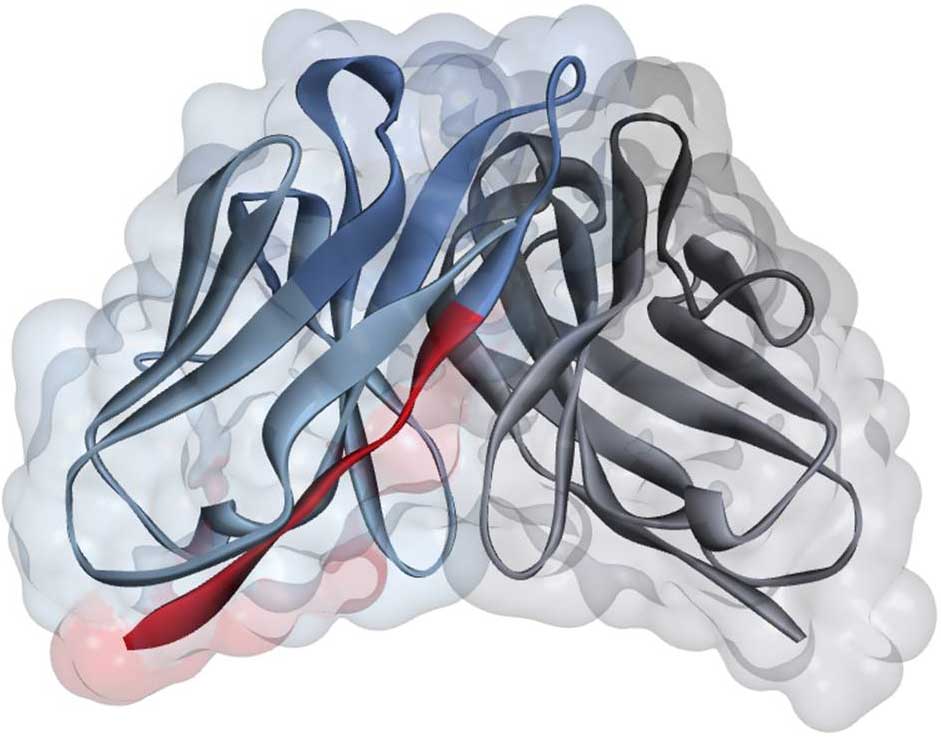 The MATCH format is a heterodimer that can contain up to six different antigen-binding sites. The variable heavy (VH) and light (VL) chains of the two core domains are placed in two separate protein chains, and their highly stable VH-VL interfaces drive the MATCH format’s heterodimerization.

MATCH – the benefits of multispecificity

In addition to its stable Fv scaffold, Numab has invented a highly flexible multispecific format termed MATCH (Multispecific Antibody-based Therapeutics by Cognate Heterodimerization). MATCH formats can incorporate up to six lambda-capped Fv building blocks and binding specificities in a true plug-and-play fashion. Most importantly, the stability of the lambda-capped Fv fragments and the fact that they do not aggregate confer excellent CMC properties on MATCH molecules. Numab is currently exploring a number of MATCH formats for use in autoimmune diseases and cancer.

Although combination therapies with mAbs have been effective in a number of indications, the administration of separate agents that each rely on their own mode and locus of action sets clear limits to efficacy and safety. The use of multispecific molecules, however, allows for the design of entirely novel mechanisms of action combined in one agent. A first generation of bi-specific cancer immunotherapies has already shown impressive efficacy in certain blood cancers. Their mechanism of action is based on the concomitant binding of a tumor associated antigen and CD3 on T killer cells to eliminate cancer cells. Numab is designing and developing the next generation of safer and more efficacious multispecific drugs. This includes approaches to further expand on the concept of specific engagement of cytotoxic immune cells, as well as combining novel synergistic functions and higher specificities in one single molecule. Numab’s heterodimeric multispecific MATCH format allows to rapidly and accurately characterize combinations of various binding specificities, thereby directly yielding potential development candidates. The half-life can easily be modulated by the addition of our building block binding to human serum albumin. Numab is constantly expanding its toolbox of stable Fv modules to address various immuno-oncology targets, such as CD3 or checkpoint inhibitors, as well as classical immunology targets.

While our human acceptor scaffold and MATCH-formats are in principle applicable to antibodies from any source, human, rodent, etc., our own proprietary pipeline is fueled by a powerful combination of rabbit immunization and an ultra-high throughput flow cytometry procedure to exhaustively characterize the full antibody repertoire (hundreds of millions in a single day) of immunized rabbits. During this procedure antibodies with the desired characteristics are specifically cloned and then screened for binding kinetics and activity, finally resulting in a panel of hundreds of high-affinity antibodies. In contrast to conventional platforms, this process doesn’t require affinity maturation to achieve low picomolar affinities. One campaign can typically be completed within one to two months after immunization.

The favorable properties of rabbit antibodies, such as high affinities and great epitope diversity, have long been known. Their use, however, has been held back because they do not fit conventional hybridoma technology, the current state-of-the-art in monoclonal antibody discovery. Our approach is an order of magnitude more efficient and is not subject to the randomness, and inherent inefficiency of hybridoma technology.